Officials of Las Piñas City, led by Rep. Mark Villar and Mayor Vergel “Nene” Aguilar publicly pledged their support for Marcos who visited the city hall on 6 April 2016.
‎The Villars have previously stated that the NP would not choose any of its three party members running for VP. However, Politiko sources said that Villar had a change of heart and decided to raly behind Marcos because he represented the biggest chance of electing NP’s first VP since the late Salvador “Doy” Laurel in 1986. Marcos is currently tied for first in the VP race with Escudero.

Aguilar, the brother of Sen. Cynthia Villar, said he picked Marcos because of his grasp of the concerns of local government units and officials because of his long experience in the executive as governor of Ilocos Norte.

Mark said that Marcos was among the few friends who remained at their side at the most difficult moment when his father, former Senate President Manuel Villar and Nacionalista Party chief, ran for president.

“That is the one thing we could never forget. Senator Bongbong, thank you very much and of course you can always count on our support not just as a party mate but also as an extended family. Senator we welcome you here in Las Pinas,” said Mark.

“Like I said, you’re not just a friend but a member of family. We will always be here for youras you have been here for us,” said Mark to Marcos.

Aguilar asked the city officials present, including all the chairmen of the city’s 20 barangays, 12 city councilors, and 114 other barangay officials to take an oath to pledge their support for Marcos, who was the first national candidate to campaign in the city.

Aguilar said he appreciates the call for unity of the senator, saying it was the same formula he followed to usher progress to the city. He said that after winning as mayor in 1995 he reached out to his former political foes and forgot all insults and tirades he had received from them. Bongbong Marcos is in the heart of Solid North – Sen. Cynthia Villar

Who will lead Nacionalista Party in 2016?

Kahit sino na lang! Here’s why Manny Villar doesn’t care who the next president is 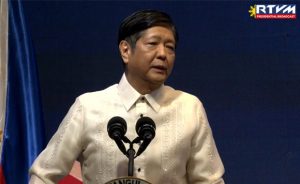