President Rodrigo Duterte wants to see proof that his son, Davao City Vice Mayor Paolo Duterte, is involved in anomalies in the Bureau of Customs— but he’s not interested in any evidence that may be presented by Senator Antonio Trillanes IV.

Duterte recalled that during the campaign season, Trillanes accused him of accumulating some P2.4 billion in undeclared bank deposits but failed to prove it.

Trillanes has tagged the younger Duterte in smuggling, presenting as proof a memorandum dated December 7, 2007, from the Presidential Anti-Smuggling Group (PASG), stating that the presidential son was involved in smuggling of sport utility vehicles, luxury vehicles, rice, sugar, and used clothes into Davao City.

The senator had demanded that Paolo be invited to the Senate in connection with its investigation into the entry of P6.4-billion worth of shabu into the country.

In Davao, Duterte reminded the public of his promise to step down if any of his children were found to be involved in corruption.

“So ‘yan lang ang sabihin ko. That is my guarantee. Pagdating ng panahon na nakita ninyo ako binobola ko kayo, you are free to advise me to step down or I myself would step down,” he said. 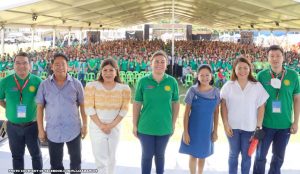