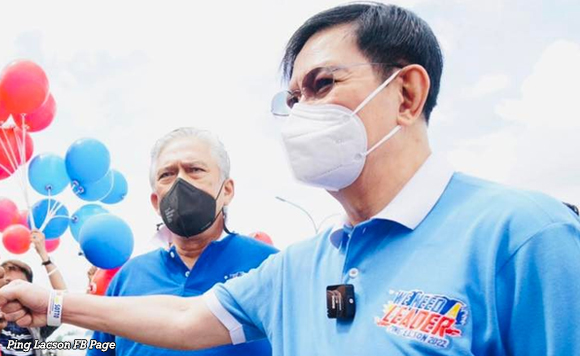 This was after the longtime public servants received complaints and suggestions directly from members of the micro, small, and medium enterprise (MSME) sector over the weekend as they toured Northern Luzon and held several dialogues with various groups in Baguio City, Pangasinan, and Nueva Ecija.

In particular, they proposed that the government institute a “paluwagan” (rotating savings and credit association) system for MSMEs and agricultural workers, so they won’t have to be burdened with loans with interest payments, especially since most of the world is still recovering from the COVID-19 pandemic.

[It would be best for us to have credit institutions that are together with a particular sector, it would be great because they would then help each other. Haven’t we all grown up to a ‘paluwagan,’ to a small community (financial group)… They won’t even have to pay interest on it, right?]

The presidential bet stressed the importance of the ‘paluwagan’ system as an informal way of saving and lending that is easy to join and often has interest-free loans, but also warned its members of the need for the government to regulate the system to protect them from scams and financial losses.

Lacson also called on the government to help banks make lending easier to businessmen and entrepreneurs to strengthen the economy as it gets back on its feet following the pandemic.

This can happen, the three-term senator said, if the government ends its over-regulation of the financial sector that is actually keeping MSMEs from getting the financial lifelines they need from legal institutions.

[What’s happening is the government intervenes and overregulation is happening, instead of helping (Filipinos). Like with farmers, the reaction of the government once there’s a shortage of crops or harvests is to import. You’re just killing farmers even more (with that).]

Under the Partido Reporma chairman’s platform, with the input of their senatorial candidates like former Agriculture Secretary Emmanuel “Manny” Piñol, the government would have a clearer direction in advancing the MSME and agricultural sectors alike.

The Lacson-Sotto ticket has already put forward a plan to buy 50 percent of the agricultural products of local farmers and fishermen, to put up model food outlets in Metro Manila, especially in Quezon City, and to strengthen the capacity of MSMEs, as proposed by Piñol.

These plans would help consumers buy fresh vegetables, fish, and meat straight from local producers and undercut the excessive importation and smuggling of food commodities that is at the root of corruption, the longtime lawmakers added.