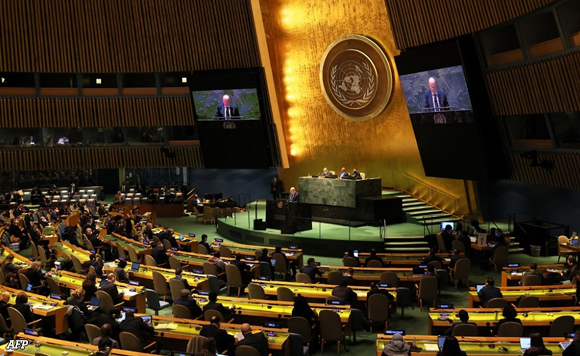 by Philippe RATER and Peter HUTCHISON

Encountering deepening global isolation, Russia faced urgent calls Monday to end its “unprovoked” and “unjustified” assault on Ukraine as the UN General Assembly’s 193 members held an extraordinary debate on the invasion of the ex-Soviet state.

During the rare emergency special session, just the 11th the Assembly has held in its history, Russia defended its decision to invade its neighbor as nation after nation urged peace from the podium.

On the sidelines, the United States said it was expelling from the country 12 “intelligence operatives” at Russia’s United Nations mission for “engaging in espionage activities that are adverse to our national security.”

Inside the General Assembly hall, UN Secretary-General Antonio Guterres, pleaded: “The fighting in Ukraine must stop. Enough is enough.”

Representatives of more than 100 countries are expected to speak over three days as the global body decides if it will support a resolution that demands Russia immediately withdraws its troops from Ukraine.

A vote is expected Wednesday, and it must reach a two-thirds threshold to pass. The resolution is non-binding but will serve as a marker of how isolated Russia is.

Its authors hope they may exceed 100 votes in favor — though countries including Syria, China, Cuba and India are expected to either support Russia or abstain.

He reiterated Moscow’s stance, flatly rejected by Kyiv and its Western allies, that its military operation was launched to protect residents of breakaway regions in eastern Ukraine.

“The hostilities were unleashed by Ukraine against its own residents,” he said during his address.

The vote is also being seen as a barometer of democracy in a world where autocratic sentiment has been on the rise, diplomats said, pointing to such regimes in Myanmar, Sudan, Mali, Burkina Faso, Venezuela, Nicaragua — and of course Russia.

“If Ukraine does not survive, the United Nations will not survive. Have no illusions,” said Ukraine’s ambassador to the UN, Sergiy Kyslytsya.

During an emotional speech, Kyslytsya held up images of what he said were the final text messages from a Russian soldier to his mother before he was killed.

“Mama, I’m in Ukraine. I’m afraid,” Kyslytsya said, reading the messages. “They call us fascists. Mama, this is so hard.”

Russian President Vladimir Putin launched the full-scale invasion of Ukraine on February 24. Moscow has pleaded “self-defense” under Article 51 of the UN Charter.

But that has been roundly rejected by Western countries and the United Nations itself. They accuse Moscow of violating Article 2 of the Charter, requiring members to refrain from the threat or use of force to resolve a crisis.

The resolution would be “a message to the world: that the rules we built together must be defended,” she added. “Because otherwise, who might be next?”

China’s UN envoy Zhang Jun warned that “nothing can be gained from starting off a new Cold War,” but did not indicate how Beijing would vote.

The move to hold the emergency session was sparked by Russia using its veto Friday to block a similarly-worded Security Council resolution.

Council members can turn to the General Assembly if the five permanent members — Britain, China, France, Russia and the United States — fail to agree to act together to maintain peace.

There is no veto right at the General Assembly, which held a similar vote in 2014 condemning Russia’s seizure of Crimea and obtained 100 votes in support.

The Security Council held a separate emergency meeting Monday on the humanitarian situation in Ukraine.

Nebenzia broke the news of the 12 expelled diplomats during a press conference, saying he had just heard the dozen had been told to leave the United States by March 7.

A US spokeswoman said the move had been “in development for several months,” implying it was not directly related to the war.