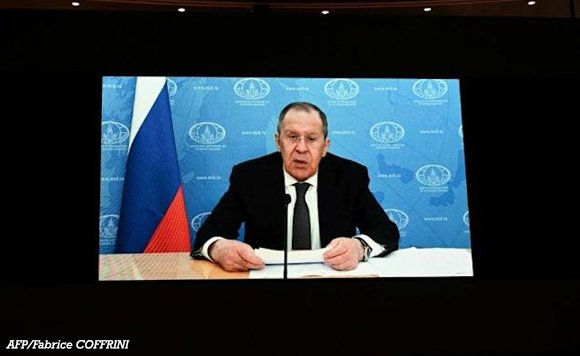 When Russia’s veteran Foreign Minister Sergei Lavrov hosted his British counterpart Liz Truss for talks in Moscow in February in a doomed attempt to avert war, he had a trick up his sleeve.

“Do you recognise the sovereignty of Russia over the Rostov and Voronezh regions?” he asked. The minister, on her first visit to Russia, duly replied the UK would “never recognise” Russia’s sovereignty of those regions.

The problem for Truss, in the incident first reported by the Kommersant daily, was that those regions are an integral part of Russia and she had to be hastily corrected by the British ambassador.

The incident prompted Lavrov to grumble in an acrimonious news conference that he was “disappointed” with their meeting and accused his British counterpart of being poorly prepared.

The ambush on his guest was symbolic of the transformation of Lavrov in the last years from a urbane master of diplomacy respected even by foes to a Kremlin attack weapon.

His increasingly cantankerous manner earned him the nickname Mr Nyet (Mr No) that Western commentators had originally given to Andrei Gromyko, who served as Soviet foreign minster for three decades as the height of the Cold War.

Named by Putin as foreign minister in 2004, Lavrov has now served almost two decades, although it remains unclear to what extent he has ever been part of the Kremlin’s inner circle.

A staunch defender of Russia’s invasion of Ukraine, he now finds himself sanctioned by the EU, UK and US, and blocked from travelling to the West.

When he addressed conferences on human rights and disarmament in Geneva on Monday — by video conference due to the new travel bans — Western diplomats walked out of the room in protest.

“I have been forced to address you via videoconference,” he lamented.

“The reason for this lies in the outrageous measures taken by the European Union, which has refused to respect one of the fundamental human rights –- the right to freedom of movement,” he added, before launching into a rambling diatribe against Ukraine and the West.

Only last week, Lavrov had been due to hold face-to-face talks with US Secretary of State Antony Blinken and French Foreign Minister Jean-Yves Le Drian to keep diplomacy alive.

But after Putin launched the invasion of Ukraine on February 24, it remains unclear if he will ever meet a Western foreign minister or travel to Europe or the US again.

The EU froze European assets linked to both Lavrov and Putin the day after the invasion and then added the two men to its sanctions list, a hugely unusual move for leaders.

The UK and US followed suit, with the American Treasury describing Lavrov as Putin’s “chief propagandist” who had “advanced the false narrative that Ukraine is the aggressor”.

But it was not always this way. Lavrov won respect from all sides for his command of the workings of the UN during his 10 year stint as UN ambassador from 1994.

While some have found him exasperating, he managed to build good relationships with counterparts notably with former US secretary of state John Kerry in building the 2015 Iran nuclear deal.

During marathon 2016 negotiations in Geneva on Syria also involving Kerry, Lavrov delighted journalists with a late night delivery of two bottles of vodka to the press room.

“The pizzas are on the American delegation and we bring the vodka,” said Lavrov, a fan of whisky and one-time chain smoker.

Lavrov, who along with English speaks fluent Sinhalese due to his past diplomatic work in Sri Lanka, has also enjoyed personal popularity and headed the ruling party’s list in elections last year.

Ahead of those elections the Russian investigative outlet istories alleged he was in a secret relationship with a woman who wielded considerable power in the Russian foreign ministry and whom he had showered with gifts including cars and property.

Former Russian foreign minister Andrei Kozyrev, who served under Boris Yeltsin in the 1990s, has launched a campaign urging Russian diplomats to resign in protest at the war.

“Lavrov, rightfully sanctioned by the US and EU, was my deputy in the 90s. Used to have my back. Today, I would watch my back if he was behind me,” he said. — Agence France-Presse