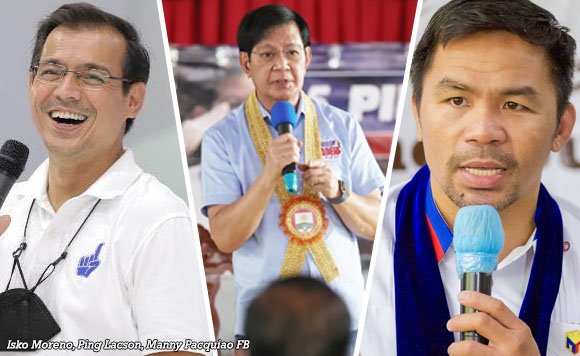 [This somehow gives us an extra boost of confidence because they recognize or Yorme and Senator Manny themselves acknowledge who deserves to lead our country. They know how to vet (potential leaders).]

Acop was referring to the recent statement made by Pacquiao, who said he would vote for Lacson as president if he is not running for the same position himself. Moreno also somewhat held a similar view when he said Filipinos could also vote for Lacson in a separate interview last January.

The erstwhile congressman and retired police officer is hoping these positive comments for Lacson, coming from his fellow presidential aspirants themselves, would somehow resonate among the electorate who are still making up their minds on choosing the next leader.

[The voters need to think carefully about who their next leader should be now that our country is reeling from the effects of the pandemic and so many other problems will still crop up in the future.]

Acop said he is aware that Lacson may not be faring well in mainstream pre-election surveys, but they remain unbothered by it halfway through the campaign period. He said the Partido Reporma chief is still optimistic, considering the warm reception he has been getting from the public on the ground.

[That’s why I don’t lose hope because when I look at him (Lacson), he still has high morale. Maybe I would be bothered once I start seeing him—using our language in the military—having a low morale. But his enthusiasm is still there.]

[What you mentioned earlier might be true—that what’s happening (with the surveys) seems upside down—but, for starters, surveys are never sure surveys. True polling and what counts the most will happen on Election Day, May 9, 2022.]