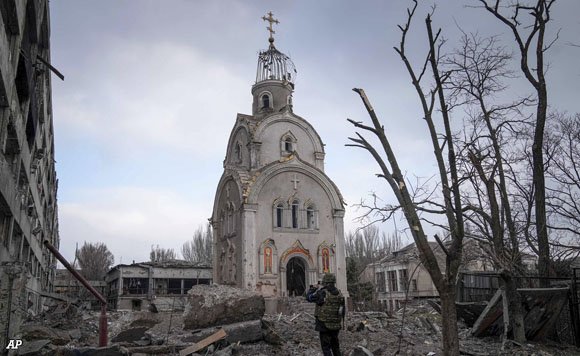 A Greek diplomat who remained in the besieged Ukraine city of Mariupol during the bombardment said on Sunday the destruction would rank alongside Stalingrad and Aleppo.

Speaking after flying back to Athens, where he has been hailed a hero, Greek Consul General in Mariupol Manolis Androulakis called on people to “unite their voices to ask for a truce, a ceasefire”.

“Mariupol will be included in a list of cities in the world that were completely destroyed by the war, such as Guernica, Stalingrad, Grozny, Aleppo,” Androulakis, told reporters at the airport.

The diplomat, who has been hailed a hero in Greece, organised many succesful evacuations of Greek expatriates before finally leaving on Tuesday.

“We tried to save as many expatriates as we could,” Androulakis said, adding that the “heroes are the people who stayed there and will try to make their lives from scratch”.

“Right now, civilians are hit blindly and helplessly”, he said revealing that he witnessed scattered human limbs in the city.

Ukrainian President Volodymyr Zelensky said the siege of Mariupol, a strategic mostly Russian-speaking port in the southeast where utilities and communications have been cut for days, would go down as a war crime.

“Our cities have turned into multi-storey ruins, every area is like a horror movie,” Sergiy Gaiday, head of the Lugansk regional administration, wrote on the Telegram messaging app.

Athens last month said nearly a dozen members of the 100,000-strong Greek minority in Ukraine had died since the beginning of the Russian invasion.

The Greek minority in the country dates back to the 18th century. — Agence France-Presse