El Shafee Elsheikh, ‘most brutal’ of the IS ‘Beatles’ 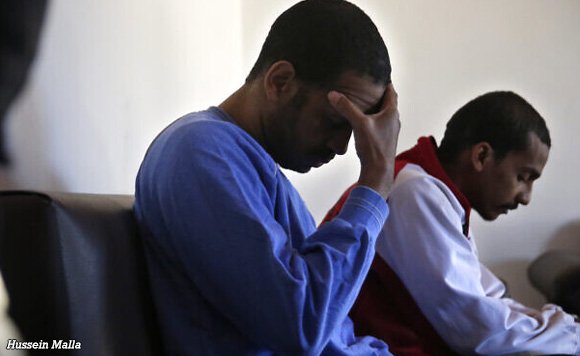 Dubbed “Jihadi George,” El Shafee Elsheikh has been described by former hostages as the “most brutal” member of the notorious Islamic State kidnap-and-murder cell known as the “Beatles.”

“George was the most crazy one,” Spanish journalist Javier Espinosa said of his 33-year-old former IS captor.

Elsheikh is on trial in federal court in Alexandria for the murders of American journalists James Foley and Steven Sotloff, and relief workers Peter Kassig and Kayla Mueller.

One of the four members of a jihadist cell nicknamed the “Beatles” by their captives due to their British origins, Elsheikh was captured by Kurdish forces in Syria in January 2018 along with another “Beatle,” Alexanda Amon Kotey, and flown to the United States.

Kotey, 37, pleaded guilty in September 2021, but Elsheikh opted to fight the charges of hostage-taking, conspiracy to murder US citizens and supporting a foreign terrorist organization.

The IS hostage-taking cell he allegedly led was involved in the abductions of at least 27 people — mostly journalists and relief workers — in Syria from 2012 to 2015.

Some were released after their governments paid ransoms, but others were murdered, including by beheading, and IS released videos of the killings for propaganda purposes.

Mohamed Emwazi, known as “Jihadi John,” was killed by a US drone in Syria in November 2015, while the fourth “Beatle,” Aine Davis, is imprisoned in Turkey after being convicted on terrorism charges.

While it was Emwazi who carried out the actual executions, Espinosa, who spent three months in IS captivity, described him as “just muscles” and said Elsheikh was “the one who was leading the others.”

“He was the most brutal in the sense that he was deciding who was going to be beaten,” he said.

Another former hostage, French journalist Nicolas Henin, said Elsheikh would frequently work himself up into a rage.

Elsheikh was born in Sudan in 1988 but moved to Britain as a child. His father left the family when he was seven years old, according to the non-profit Counter Extremism Project (CEP).

Elsheikh studied mechanical engineering at Acton College in London, according to CEP, and was stabbed in a fight with a gang member when he was 19.

He married an Ethiopian woman in Canada when he was 21, CEP said, but was not allowed to bring her to Britain, deepening his anger at the British government.

“He had this hate for the Western world and for Westerners deep inside him, even if he grew up in England,” Espinosa said.

Elsheikh became increasingly radicalized and took part in a “Muslims Against Crusades” demonstration outside the US Embassy in London on September 11, 2011, according to the US indictment.

He traveled to Syria in 2012, the indictment says, to “wage violent jihad on behalf of radical Islamic groups,” first joining an Al-Qaeda affiliate there and then IS.

Between 2012 and 2015, Elsheikh and the others seized numerous hostages and administered torture including electric shocks, waterboarding and mock executions, the indictment says.

In an interview with The Washington Post after his capture, Elsheikh denied ever torturing captives but acknowledged he did not always show them “compassion.”

He said he was just a subordinate in the group, only responsible for collecting information about the hostages such as email addresses so the captors could be in touch with their families to discuss ransoms.

Espinosa, the El Mundo reporter and former hostage, had a very different recollection.

“He was very happy to have the power of deciding the life of people,” Espinosa said. “Who was going to die and who was going to live.” — Agence France-Presse