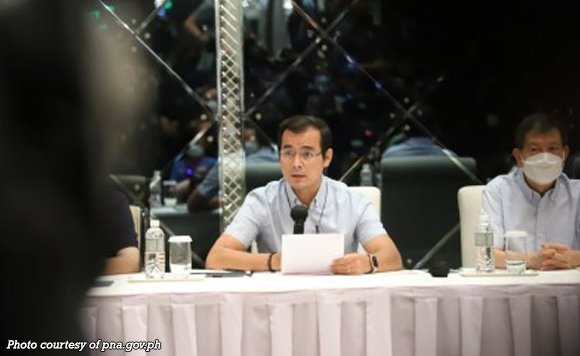 MANILA – Aksyon Demokratiko standard-bearer Isko Moreno said he gave Vice President Leni Robredo a dose of her own medicine when he asked her to withdraw her presidential bid.

In an interview in Surigao City on Monday, Domagoso said he experienced “bullying” from the Robredo camp.

“They were asking us since Day One, withdraw Isko. Sa totoo lang, ‘yan ang daing ng ordinaryong Pilipino. Kapag malaking tao ang nambu-bully, okay lang. ‘Pag ang ordinaryong tao, nangatwiran, bastos o masama na (Honestly, that is the gripe of the ordinary Filipino. If it is the rich and known people who are bullying, it’s okay, but if an ordinary person reasons out, he is rude),” he said.

Domagoso said nobody has the right to ask anyone, more so a rival candidate, to withdraw and quit the race.

He said the Robredo camp had persistently called on him as well as the other presidential candidates to drop their presidential bids in the belief that it will make her win against perennial survey frontrunner Ferdinand “Bongbong” Marcos Jr.

“It’s just a fair call. Kung ano ang sinabi nila dati, narinig din nila sa sarili nila (They themselves said these words before. Now they are hearing the same). Nothing unusual,” he said.

Domagoso said social injustice and elitist politics have become clear and obvious in this case.

With how things are being done by the Robredo camp, Domagoso said “marumi talaga maglaro dilaw, sobra (the Yellows really play dirty)”, pertaining to the color associated with the opposition.

Lacson and Gonzales confirmed that the Robredo camp similarly asked them to drop their bids.

The trio insisted they will not withdraw.

“Each of us will continue with our respective presidential campaigns and strive to be worthy of choices from which our people will select,” the joint statement read. (PNA)