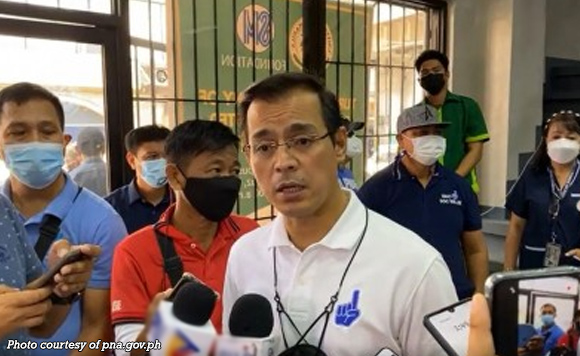 MANILA – There will be no squabbling with political foes if Aksyon Demokratiko standard-bearer Francisco “Isko Moreno” Domagoso wins the May 9 presidential elections.

Domagoso also said he and his allies will quickly buckle to work to ensure that their promise to the electorate will be fulfilled.

“Kaya, samahan nyo ako mga kababayan, I will give you peace of mind. Walang away, walang higantihan, walang bawian. Focus lang tayo sa problema. Ang tatrabahuhin namin ni Doc Willie (Ong), ang tatrabahuhin namin ni Carl Balita, John Castriciones, Samira Gutoc, at Jopet Sison, magkaroon tayo ng murang bilihin, murang kuryente, murang gasolina, bahay, eskwelahang maayos, ospital, minimum basic needs, at higit sa lahat, makapagbigay tayo ng trabaho sa tao (Please join me, my countrymen, I will give you peace of mind. There will be no fighting, no revenge, no getting even. We will focus on the country’s problems. [If] Doc Willie [Ong] wins, we will focus along with Carl Balita, John Castriciones, Samira Gutoc, and Jopet Sison on how to provide cheaper goods for our countrymen, cheap electricity, more affordable gasoline, good schools and hospitals, and the minimum basic needs of our people, we will also focus on providing more jobs for our fellow Filipinos),” he added in a statement late Monday.

And with just days away before the May 9 elections, Domagoso said he will continue to do his best to consolidate and rally his supporters, then leave the rest to God’s will for whatever fate the Almighty has in store for him.

In an earlier interview, the 47-year-old Manila mayor said he is determined to compete till the last minute of the campaign period if only to instill to the public that he can give the people peace of mind and a better future if given the chance.

Domagoso said his faith in God has sustained him and guided him throughout his life — from the start as a lowly “basurero”, in his 24 years of public service, and to being a father to his family and father of the Philippine capital.

The presidential aspirant added that this faith in God, and his faith in the people’s indomitable spirit, is sustaining him even now as he fights for the welfare of every Filipino. (PNA)