From Kim-Trump summits to missile tests: the failures of South Korea’s Moon 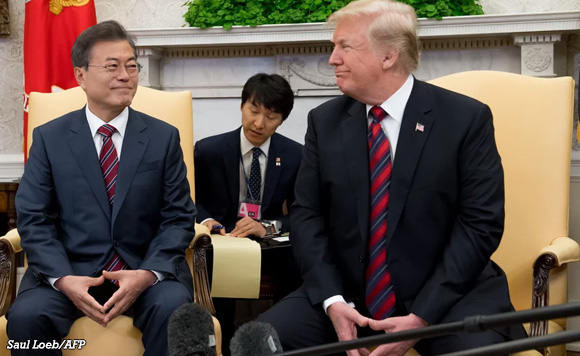 Peace with North Korea and a “fair and just” society in the South: outgoing President Moon Jae-in made big promises, but after five years in power, he has failed to deliver, analysts say.

Talks between Washington and Pyongyang that Moon brokered have collapsed, North Korea is test-firing long-range missiles again, and leader Kim Jong Un last week said he was strengthening his nuclear arsenal “at the fastest possible speed”.

Public frustration with his administration is what galvanised a political opposition in disarray, analysts say — Moon will hand power on May 10 to Yoon Suk-yeol, whose conservatives he ousted from government five years ago.

“Moon’s biggest legacy will be the election of Yoon as president,” Gi-Wook Shin, a sociology professor at Stanford University, told AFP.

An avowed anti-feminist and right-wing security hawk, Yoon is the antithesis of Moon, and his threats of a pre-emptive strike on North Korea have already undone much of Moon’s cherished attempts at inter-Korean rapprochement.

Moon’s diplomacy has come to nought anyway, with Kim recently issuing a veiled threat to use his nukes more expansively, Cheong Seong-chang of the Sejong Institute told AFP.

His decision to send “warm greetings” in a farewell letter to Kim last month showed “questionable” judgement in light of the fact Pyongyang is preparing for a nuclear test, Cheong said.

Unquestionably, Moon has enjoyed a historic run in office: in 2018, he became the first South Korean president to give a speech to the North Korean public, receiving a standing ovation in Pyongyang.

“I propose that we should completely end the past 70 years of hostility and take a big stride of peace to become one again,” Moon told a packed May Day Stadium.

He helped facilitate talks which resulted in groundbreaking summits between then-US president Donald Trump and Kim, but the efforts collapsed in 2019.

Since then, Pyongyang has labelled Moon a “meddlesome mediator”, blown up a Seoul-financed joint liaison office north of the border, and in March test-fired an intercontinental ballistic missile at full range for the first time since 2017.

Moon is the only South Korean president to hold three summits with Kim but he “gave too much credit to North Korea’s bandwidth for engagement and peacebuilding,” said Soo Kim of the RAND Corporation.

“Kim has shown us that he cannot be convinced to give up his weapons, in any shape or form, since they’re so closely tied to his own survival,” she told AFP.

Moon swept to power after his predecessor was impeached over a scandal that involved academic favours for the daughter of a presidential confidante.

In his inaugural speech in 2017, Moon promised: “Opportunities will be equal. The process will be fair, and the result will be righteous.”

But his own key aide Cho Kuk was later caught in a scandal involving bribery, and Moon was seen as excessively sympathetic while his successor Yoon won praise as a fair-minded prosecutor overseeing the case.

One of Moon’s landmark policies, raising taxes on owners of multiple homes, made no sense economically, Park said.

The policy “does not equate to the market principles”, Park told AFP, adding that the government did not recruit housing experts for policymaking.

And when ministers in his cabinet were revealed to have more than one house, contravening their own policy, it caused “chaos”, Park said.

The affable-seeming Moon remains personally popular in South Korea, with an approval rating of 44 percent — nearly double that of many previous presidents at the end of their terms.

But his failures have left his followers disillusioned while energising and motivating opposition conservatives, Vladimir Tikhonov, professor of Korean studies at the University of Oslo, told AFP.

“It was a presidency with much promise in the beginning, but little of the promise was realised in the end.” — Agence France-Presse