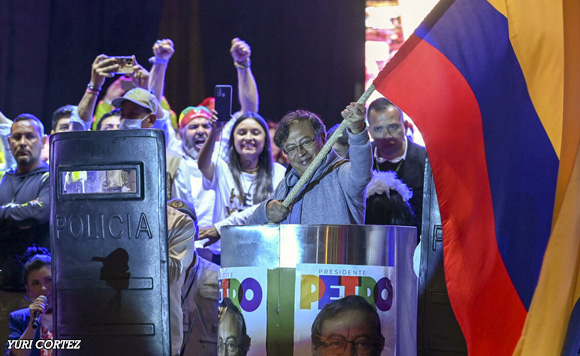 Two former mayors — a leftist and a right-wing conservative — are projected to emerge as the last men standing in a high-stakes race for the Colombian presidency after a first round of voting on Sunday.

Gustavo Petro, a 62-year-old who is polling far ahead of his rivals, is hoping to become Colombia’s first-ever left-wing president and wrest control from the political and economic elites who traditionally hold power in the country.

He received 4.5 million votes in a primary election round in March, more than double the 2.2 million garnered by his closest rival.

These are the frontrunners at a glance.

Petro was mayor of Bogota from 2012 to 2015 — a stint that was not without controversy and gave birth to unflattering accounts of his management style and alleged despotic tendencies.

He entered the 2022 presidential race, his third, as a self-styled warrior for the marginalized — Black and Indigenous people, the poor and the young — promising to address hunger and inequality.

The father of six is described as a good orator, though not necessarily charismatic. He is a map buff, and a keen social media user.

Born into a family of modest means on Colombia’s Caribbean coast, Petro embraced leftist politics as a teenager after the 1973 coup d’etat in Chile that unseated the world’s first elected Marxist leader Salvador Allende.

He joined the M-19 urban guerrilla group as a 17-year-old, but insisted afterward that his role in Colombia’s decades of bloody civil war was as an organizer, never a fighter.

Petro was captured by the military in 1985 and claimed to have been tortured before spending almost two years in jail on arms charges.

He was freed and the M-19 signed a peace deal with the government in 1990. He has since served as a senator and mayor.

Petro’s critics have sought to portray him as a radical populist who will bring about Venezuela-style economic collapse.

He has, however, railed against the “banana republic” rule of Colombia’s neighbor and vowed there would be no expropriation on his watch.

Petro is no stranger to death threats, though he recently told AFP he tries to avoid thinking about that possibility in a country with a tradition of political killings.

Petro travels in a convoy of a dozen armored vehicles accompanied by police on motorcycles, an ambulance and snipers.

He has said he would reopen negotiations with Colombia’s last guerrilla group, the ELN, and seek to peacefully dismantle the drug trade.

He has made it his mission to address climate change, somewhat controversially by phasing out crude oil exploration — a major income-earner for Colombia.

Petro’s closest rival is Federico “Fico” Gutierrez, at 47 the youngest of six candidates. The ruling party and others on the right have thrown in with him.

He calls himself the “common sense” candidate on a mission to become “the people’s president.”

Gutierrez’s focus has been on ever-present security concerns in Colombia, still struggling to emerge from nearly six decades of civil conflict between guerrilla and paramilitary groups, drug cartels and the government.

With his long-in-the-back, tousled hair, the civil engineer likes to roll up his sleeves and mix with his constituency, embracing people on the campaign trail.

He has made the fight against crime his signature issue.

In 2017, as mayor, he became personally involved in the ultimately successful search for three people on motorcyclists who had robbed a car driver.

He started a Twitter campaign that included a video of him going along on the police operation, and is now promising a similar “strong state” approach to guerrillas and drug gangs.

Gutierrez ended his term as mayor of Medellin in 2019 as the most popular in the country, with an approval rating of nearly 85 percent.

But he was denounced by a press freedom group for spending some $38 million in public money on anti-crime advertising to benefit his personal brand.

Gutierrez has spent much of his campaign criticizing his rival. Supporters at a recent rally waved placards that said “No communists” and “We are not terrorists.”

Independent candidate Rodolfo Hernandez, a 77-year-old businessman and former mayor who is running on an anti-corruption, has only an outside chance of victory.

His populist rhetoric has helped him gain followers with each new opinion poll, but he has never risen above third place.

Among other things, Hernandez has proposed closing embassies to pay student loans and making a visit to the sea a right for all Colombians. — Agence France-Presse