Biden: superhero, lame duck – or both? 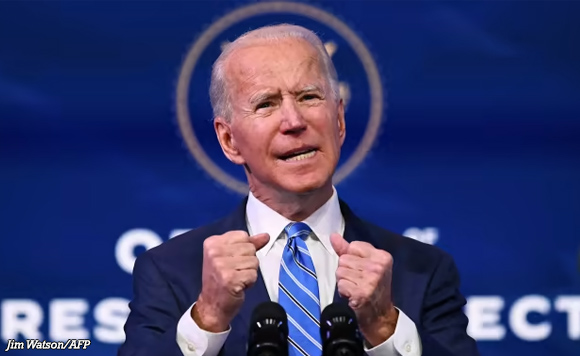 So what do Americans see in Joe Biden — a doddery has-been whom even his own party doesn’t want around, or an improbable superhero? After an extraordinary week in Washington politics, the answer is a bit of both.

The 79-year-old’s political obituary has been issued more times than can be counted since he took office in 2021 amid the political wreckage of Donald Trump’s presidency, a pandemic and fear of economic disaster.

Now he’s fighting back. Or at least his alter-ego, a comically sinister cartoon character dubbed “Dark Brandon” is.

In political nerd circles, the meme has been doing the rounds — and it started going viral on Twitter this week as Biden notched win after against-the-odds win.

The “Dark Brandon” character was originally invented on Twitter by depressed leftists, angry that their centrist president was failing to get things done. They called him Brandon in a nod to a separate, vulgar Republican meme using the same name — and added death ray eyes.

But all of a sudden, mainstream Democrats are embracing “Dark Brandon” as their own, rebranding him from ineffectual grandfather figure to a kind of political terminator.

“Dark Brandon cannot be stopped,” reads one caption over a portrait of Biden with deeply tanned skin and fiery yellow eyes.

Another version depicts a photoshopped Biden capturing lightning in his hands, white light shooting from his eyes.

– Friday, Biden gets a blockbuster jobs report showing US unemployment back to a half-century low.

And all that with a tiny Democratic majority in the House of Representatives and only one extra vote in the Senate.

Biden isn’t the reincarnation — as he reportedly would like to be — of his hero Franklin D. Roosevelt, who rebuilt the United States in the Great Depression, tweeted Slate political writer Jordan Weissmann.

“But as of now it looks like Biden’s first term could be on par w/ Obama’s when it comes to significant achievements, and with a much smaller majority.”

Not so fast say Republicans, some of whom literally portray Biden as a mentally incompetent puppet of far-leftist handlers.

Ronny Jackson — a former White House physician who famously praised Trump’s “good genes” and suggested the obese Republican had the capacity to live to 200 — has caused a stir by going on Fox News and other right-wing outlets to diagnose Biden with “cognitive failures.”

But even setting aside the smears about Biden’s health, there’s no denying that a large majority of Americans — from left and right — don’t think he’s on the right track.

They blame him for Democratic infighting in Congress, for declaring victory too soon over Covid last year, for the ugly exit from Afghanistan, and for four-decades-high inflation.

And they don’t want him to stick around.

Only 18 percent of voters want Biden to run for a second term in 2024, according to a fresh Yahoo News/YouGov poll.

The poll gives Biden a 35 percent overall approval rating, with just 30 percent on the economy, and only 26 percent believing he is “up to the challenges facing the US.”

Most surprising — or, if you’re Biden, worrying — is that the naysayers include a growing number of Democratic members of Congress.

Usually, party support for an incumbent president to seek a second term is automatic. To challenge is almost unthinkable.

But when it comes to Biden, who would be a record 86 years old by the end of a second term, even high-ranking allies are getting cold feet.

Axios counts nearly 20 elected Democratic officials who have recently refused to back a second term.

One congresswoman, Carolyn Maloney, coyly answered that “I happen to think (Biden) won’t be running.”

To which the White House says nonsense. “The president intends to run in 2024,” Press Secretary Karine Jean-Pierre has repeatedly declared.