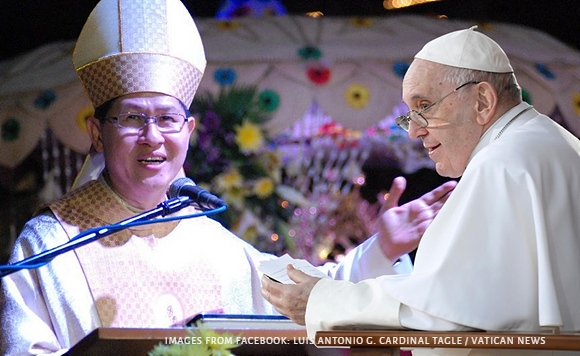 Tagle, the 65-year-old former Manila archbishop, is among the reported frontrunners to succeed Pope Francis amid rumors about a looming papal resignation, according to international media reports.

The London-based Catholic Herald recently published an article “Erdő vs. Tagle: the battle to be the next Pope.”

In the August 5 article, the Catholic publication wrote that a Pope coming from the developing world such as Tagle would be “hailed by liberals.” It also noted the Pope “is said to favour Cardinal Tagle or Italian Cardinal and Vatican Secretary of State Pietro Parolin.”

Choosing Cardinal Péter Erdő of Hungary, a conservative canon law expert, on the other hand, could “send a powerful message about the direction the Church would be taking,” the article said.

“A contest between Erdő and Tagle would show a Church at a crossroads, not just between conservatives and liberals, but between the forces of traditionalism in Europe – the original heart of Catholicism – and the changing face of the faith, focused more in the developing world, yet still largely conservative in outlook, not least on LGBT issues. If symbolism matters, then Erdő vs. Tagle would be a contest not just of ideas but of perception and identity,” the Catholic Herald article read.

Tagle’s name has also been mentioned in the NewsWeek article “Black or Asian Pope Tipped To Succeed Francis if He Resigns“ last August 21.

According to the Newsweek article, bookmakers have tipped that Cardinal Tagle and Ghanaian Cardinal Peter Turkson as favorites to be elected the next pope.

A number of netizens welcomed the news and expressed hope about the possibility of a first Filipino pope.

In 2019, Tagle vacated his local Manila post after Pope Francis brought him to Vatican City to lead the Congregation for the Evangelization of Peoples.

A year later, Pope Francis promoted Tagle as Cardinal-Bishop, the highest rank in the Catholic Church’s College of Cardinals.

The Filipino prelate later gained additional roles in the Vatican.

In February 2021, he was appointed member of the Administration of the Patrimony of the Apostolic See, which operates like Vatican’s central bank.

Last June, Tagle was named member of the Congregation for Divine Worship and the Discipline of the Sacraments.