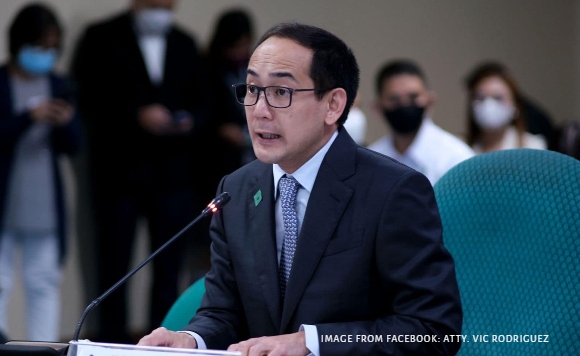 Executive Secretary Vic Rodriguez is under fire over his alleged role in the sugar importation mess.

Senator Risa Hontiveros has questioned Rodriguez’s supposed prior knowledge about the draft sugar importation order during a Senate blue ribbon hearing on Tuesday.

The order to import 300,000 metric tons of sugar, signed by then Agriculture Undersecretary Leocadio Sebastian, was uploaded on the Sugar Regulatory Administration website on August 10. The Palace later dismissed the resolution as illegal.

“As early as August 5, 2022, a draft of the Sugar Order No. 4 was already submitted to former SRA administrator Leo Sebastian. In the afternoon of August 5, the DA OSec already wrote to the ES na inamin niya ngayon and sent him the said draft as well as a Memorandum for the President,” Hontiveros said.

Hontiveros pointed out that Rodriguez acted as if it was the first time he heard about the memorandum. “Why suggest na first time mo nadinig na may Sugar Order No. 4, when you were informed and kept in the loop as early as August 5?” Hontiveros asked Rodriguez.

The senator was referring to a July 15 Palace memorandum authorizing Sebastian to serve as ex-officio member of committees and bodies and sign certain administrative issuances.

Sebastian earlier claimed he signed the sugar import order to boost the country’s supply based on the authority given to him in the Palace memo. He quit his post after the Palace questioned the unauthorized signing of the order.

Hontiveros said the matter could have been a simple policy issue on the country’s sugar requirement. The sugar controversy however has become the “fallout of a messy, haphazard bureaucracy.”

With Rodriguez supposedly aware of the draft sugar order, Hontiveros is also baffled by “packaging” that President Marcos was allegedly deceived about matter.

“This could have been a simple policy debate on the sterile question of do we need more sugar. Pero bakit may packaging na niloloko ang Pangulo, bakit pinapalabas na may paglilinlang?” she asked.

Rodriguez briefly attended the Senate hearing, insisting the sugar import order was not authorized by the President. He bared that he confronted Sebastian about the illegal order, questioning his action “without the President’s knowledge and in an unfair and dishonorable way.”

Hontiveros filed a motion to recall the Palace official to answer questions in the next hearing.

“This was not about one man misinterpreting intent and acting outside powers. This is the fallout of a messy, haphazard bureaucracy. Wag na natin i-minimize ang damage na nagawa nito,” she said.