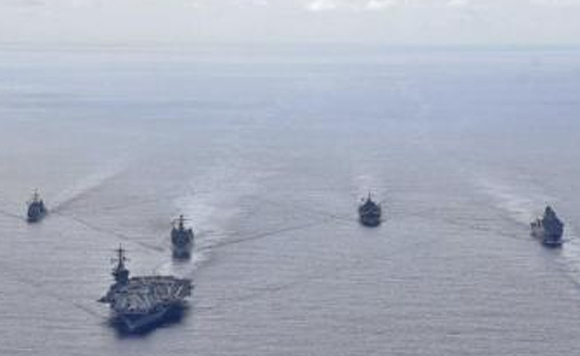 Two United States warships sailed through the Taiwan Strait on Sunday, the American navy said, the first such transit since China staged unprecedented military drills around the island.

In a statement, the US Navy said the passage “demonstrates the United States’ commitment to a free and open Indo-Pacific.”

Tensions in the Taiwan Strait soared to their highest level in years this month after US House Speaker Nancy Pelosi visited Taipei.

Beijing reacted furiously, staging days of air and sea exercises around Taiwan. Taipei condemned the drills and missile tests as preparation for an invasion.

Taiwan lives under constant threat of an invasion by China, which claims the self-ruled, democratic island as part of its territory to be seized one day — by force if necessary.

Washington diplomatically recognizes Beijing over Taipei, but maintains de facto relations with Taiwan and supports the island’s right to decide its own future.

The US Seventh Fleet said the pair of Ticonderoga-class guided-missile cruisers — the USS Antietam and the USS Chancellorsville — conducted the “routine” transit on Sunday “through waters where high seas freedoms of navigation and overflight apply in accordance with international law.”

“These ships transited through a corridor in the Strait that is beyond the territorial sea of any coastal State,” a statement said.

“It sends a very clear message,” a White House official, National Security Council spokesman John Kirby, said Sunday on CNN. “The US Navy will sail, fly and operate wherever international law allows it to.”

Kirby, a retired navy rear admiral, said the operation had been “planned long ago.”

The Chinese People’s Liberation Army (PLA) said the United States had “openly hyped up” the ships’ passage through the strait.

“The PLA Eastern Theatre Command is following and warning the US vessels throughout their entire journey, and is aware of all movements,” spokesman Senior Colonel Shi Yi said.

“Troops in the (eastern) theatre remain on high alert and are prepared at all times to foil any provocations.”

Taiwan’s defense ministry confirmed a pair of warships sailed from north to south through the channel.

“During their southward journey through the Taiwan Strait, the military is fully monitoring relevant movements in our surrounding sea and airspace, and the situation is normal.”

– ‘Freedom of navigation’ –
The Seventh Fleet is based in Japan and is a core part of the US Navy presence in the Pacific.

The US and Western allies have increased “freedom of navigation” crossings by naval vessels of both the Taiwan Strait and South China Sea to reinforce the concept that those seas are international waterways, sparking anger from Beijing.

Washington has said its position on Taiwan remains unchanged and has accused China of threatening peace in the Taiwan Strait and using the visit by Pelosi as a pretext for military exercises.

China’s drills included firing multiple ballistic missiles into waters off Taiwan — some of the world’s busiest shipping routes — which was the first time Beijing has taken such a step since the mid-1990s.

Taiwan staged its own drills, simulating a defense against invasion and displaying its most advanced fighter jet in a rare nighttime demonstration.