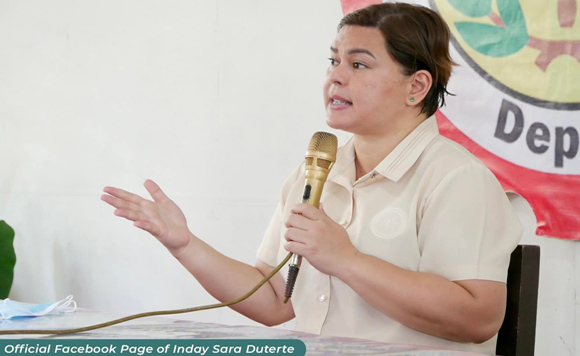 Vice President and Education Secretary Sara Z. Duterte on Monday ordered the country’s security sector to “show no mercy against criminals and terrorists.”

In her speech during her meeting with security officials, Duterte noted that although they have not discussed specific matters on insurgency, the security sector was clearly instructed on the treatment of law and state violators.

“We reassure each other that the Office of the President, the Office of the Vice President, and the entire government is behind all of them, sa kanilang trabaho (their job) against terrorism… That’s why in our prepared statement, which was also communicated to them that there should be no mercy against terrorists and criminals,” said Duterte, who was designated as the country’s officer-in-charge (OIC) while President Ferdinand Marcos Jr. is on a state visit to Indonesia and Singapore.

She led the sit-down meeting to identify the current security status and to maintain peace and order in the country.

Duterte also assured that there is no present threat to national security, however, she mentioned the need to intensify interagency cooperation to prevent the “slowdown of national and economic aspirations” due to motivating forces against the country’s progress.

“Our objective was to strengthen existing coordination and enhance interagency cooperation on issues concerning our national security and the country’s development… Our policy against criminals and terrorists and those that support and espouse their ideologies of violence should be hardline,” she said.

Besides calling against criminality and terrorism, the country’s second highest official also confirmed they have discussed pushing for the realization of mandatory Reserved Officers Training Corps (ROTC).

“Napag-usapan din po ang (We also talked about the) ROTC and ideas were exchanged with regard to ROTC, not just in Basic Education, but in Higher Education and andun ‘yung mga ways forward to give meat dun sa declaration ng ating pangulo na ibalik ang (of our president to revitalize the) ROTC as a mandatory requirement for citizens,” she added.

Targets to strengthen interagency linkages were also set during the meeting.