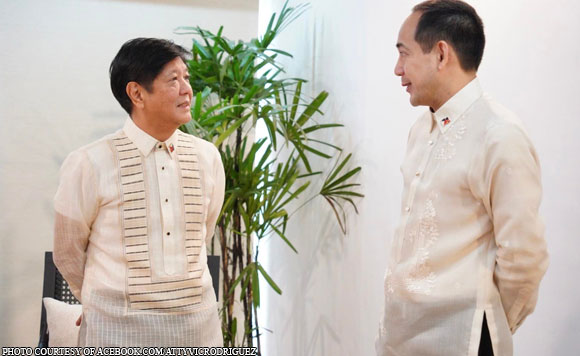 President Ferdinand Marcos Jr. has rejected the proposal of newly resigned Executive Secretary Vic Rodriguez to sign contracts and give directives to various government agencies as Presidential Chief of Staff.

Presidential Spokesperson Trixie Cruz Angeles on Saturday (September 17) said Marcos rejected the draft Special Order (SO) on the additional functions of the PCS based on the recommendation of Chief Presidential Legal Counsel Juan Ponce Enrile.

Rodriguez revived the position of PCS through Administrative Order No. 1, which was drafted ahead of his announcement that he was “stepping down” as Executive Secretary.

Cruz Angeles said Marcos appointed Rodriguez as PCS and the latter will assume the position “immediately.” He will have the rank and perks of a Cabinet Secretary.

In a five-page memorandum dated September 15, 2022, Enrile recommended against the creation of the PCS post, saying it will overlap with the functions of other existing government offices.

Marcos’ 98-year-old chief legal counsel also detailed the powers that Rodriguez sought as PCS, as indicated in the rejected draft SO. These include the power to “sign and approve memoranda, administrative issuances and instruments, contracts, and administrative and financial documents;” “implement instructions for the efficient and effective operations of departments, agencies and offices,” and “implement policies and standards for the efficient and effective operations of the Office of the President and its attached agencies.”

Quoting from AO 1, Cruz Angeles said the PCS “shall have the primary function of supervising and ensuring the efficient and responsive day-to-day operational support to the Presidency to enable the President to focus on strategic national concerns.”

“The PCS will be assisted by a senior deputy chief of staff with the rank of secretary and two deputy chiefs of staff with rank of undersecretary, assistant secretaries and such number of directorial and other administrative staff as he deems necessary and upon the approval of the President,” read A.O. No. 1.

Cruz Angeles said Rodriguez’s staff at the OPCOS will come from the Office of the Cabinet Secretary and the Presidential Anti-Corruption Commission, which were recently abolished as part of the Marcos administration’s rightsizing efforts.

“In a nutshell, the OPCOS will serve as the coordination mechanism of the Office of the President. It will be in charge of the President’s security monitoring system, which shall be responsible for providing regular situation reports to the President on a real-time basis,” Cruz Angeles explained.

“The OPCOS will also supervise and coordinate closely with the PMS as the primary government agency directly responsible for providing substantive staff assistance in the Presidential exercise of the overall management of the development process,” she added.

Cruz Angeles said Rodriguez will also be tasked with coordinating closely with presidential advisers and assistants, who will be submitting their outputs to Marcos through him—though a copy will also be furnished to the next Executive Secretary.

Politiko reported that retired Chief Justice Lucas Bersamin is reportedly being eyed as Rodriguez’s replacement in the post known as the “Little President.”