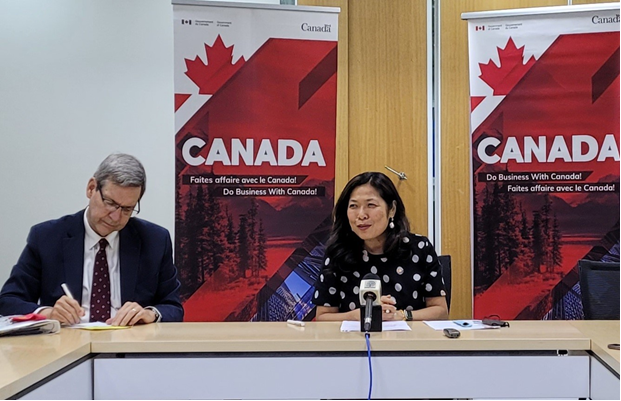 The Government of Canada has announced a C$12 million (P519 million) development assistance funding for three projects in the Philippines to help strengthen the country’s climate finance mechanisms, support women empowerment and achieve lasting peace and development in the Bangsamoro Autonomous Region in Muslim Mindanao (BARMM).

Mary Ng, Canadian Minister of International Trade, Export Promotion, Small Business and Economic Development, made this announcement during her visit in Manila early this week. Ng became the first trade minister of any country to visit the Philippines under the new administration of President Ferdinand Marcos Jr.

She said the announcement is being made on behalf of Harjit S. Sajjan, Minister of International Development and Minister responsible for the Pacific Economic Development Agency of Canada.

In a media handout, the Canadian Embassy in Manila said the funding will be for the following initiatives:

During her trip, Ng highlighted that Canada is home to nearly one million people of Filipino heritage, who make important contributions to Canadian communities. She demonstrated that her government looks forward to deepening people to people ties and the trade and investment relationship between Canada and the Philippines, including through the negotiation of a free trade agreement with ASEAN and the recently launched Canada-Philippines Joint Economic Commission.

“Canada is home to nearly one million people of Filipino descent, and I’ve seen first hand how their hard work and creativity contribute to vibrant communities in Canada and here in the Philippines. Canada is the first country to send a trade minister to the Philippines after the inauguration, and this absolutely reflects our commitment to strengthen our relationship with the Philippines. Let us continue to invest in one another’s prosperity,” Minister Ng said.

While in Manila, Ng met with various Filipino business leaders, including women entrepreneurs and the Chief Executive Officer of Jollibee Ernesto Tanmantiong, to create additional opportunities for inclusive trade and investment, including in important sectors such as green technology, agriculture, and infrastructure. She also met with the President of the Asian Development Bank, Masatsugu Asakawa.

In addition, Ng highlighted a new Canadian partnership framework for international infrastructure development in line with the new administration’s With President Marcos drive to woo infrastructure investments in the Philippines. Canada, she said, is looking forward to help build more roads, bridges, and hospitals while creating local jobs.

As one of Southeast Asia’s strong partners, Canada

has provided C$3.7 billion in development funds since 2000 to help advance the social well-being across the region, including in the Philippines. Inclusive growth and human rights lie at the core of Canada’s trade policies and engagements.