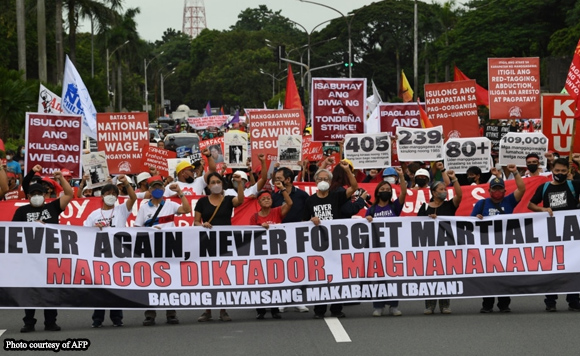 By Cecil Morella and Lucille Sodipe

Philippine protesters vowed Wednesday to “never forget” the human rights abuses under former dictator Ferdinand Marcos as they held rallies to mark 50 years since his imposition of martial law.

Amnesty International estimates thousands of people were killed and tens of thousands tortured and imprisoned after Marcos imposed martial law on September 21, 1972, unleashing security forces on rivals, critics and dissidents.

Marcos’s son is now the president of the Philippines, and campaigners have urged him to recognise his family’s role in the violence.

“The Marcoses need to at least acknowledge their role in those dark days,” said Carlos Conde, a researcher for Human Rights Watch, as activists and victims marked the 50th anniversary.

“Without truth-telling, without the space for Filipinos to understand and accept what happened during martial law, we can never find closure, we can never move forward.”

Hundreds of protesters, including human rights activists and Christian groups, held peaceful demonstrations across the capital Manila, carrying placards with slogans such as “never again” and images of martial law victims.

“A nation that doesn’t remember its history is doomed to repeat it as they say,” said John Magtibay, a 22-year-old film student protesting at the University of the Philippines.

“We are beginning to see that now.”

Half a century after martial law began, 11,103 people have been officially recognised as victims of torture, killings, enforced disappearances and other abuses.

They have been compensated with some of the wealth — estimated to be in the billions of dollars — stolen by Marcos and his wife Imelda.

But human rights groups say there has never been a true reckoning of the abuses — or those responsible held to account.

Marcos was toppled from power by a bloodless “people power” revolt in 1986 and the family was chased into exile.

After the patriarch’s death in 1989, they returned to the Philippines and began a remarkable political comeback that culminated with Ferdinand Marcos Jr’s victory in the May 9 presidential election.

“The fact that we allowed the Marcoses to re-enter Malacanang is really messed up,” said Patricia Pobre, a 24-year-old protester, referring to the presidential palace.

– ‘One of the darkest periods’ –
His landslide win was helped by a massive online misinformation campaign that whitewashed abuses and corruption during the dictatorship.

Martial law victims and activists have described the Marcos regime as “one of the darkest periods” in the country’s history.

They accuse Marcos Jr and his supporters of distorting the facts about martial law and falsely portraying it as a “golden age” for the Philippines.

“There are young Filipinos who are interested in learning what really happened in spite of many others who were really blinded,” said former political prisoner Bonnie Ilagan, who spent two years in jail where he was repeatedly tortured.

“The fight continues. We must never forget.”

Ilagan and others accused Marcos’s allies in Congress of slashing budgets and weakening the government agencies responsible for preserving the nation’s past.

In the run-up to Wednesday’s anniversary, documentary screenings and exhibitions have been held to educate the public about the horrors of martial law.

But a left-wing political party said they were forced to scrap a film screening in suburban Manila on Tuesday after five members of the local police intelligence unit showed up and “harassed” them and “shot video”.

Marcos Jr, who has repeatedly praised his father’s rule, last week defended martial law as “necessary” to protect the country against communist and Muslim insurgencies.

“We do recognise the problems that happened, the abuses that occurred like in any war,” Marcos Jr said.

But he said critics were “wrong” to call his father a “dictator”.

“There’s no reason to revise history,” he said, while suggesting school textbooks need to be rewritten “only if they’re wrong”.

Cristina Palabay of the Karapatan human rights alliance accused Marcos Jr and his administration of peddling “one lie after another”.

“There needs to be institutionalised acknowledgement and great reckoning on the crimes committed by Marcos and his ilk,” she said.