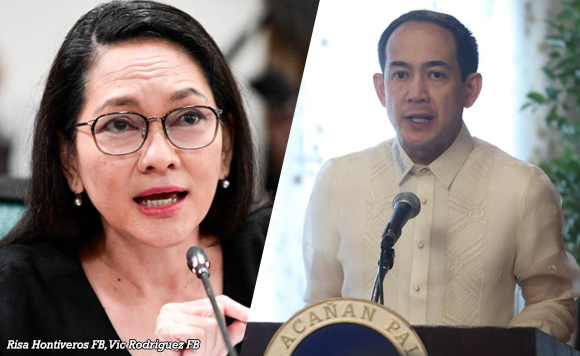 Senator Risa Hontiveros has asserted that former Executive Secretary Victor Rodriguez should be held accountable for his evasiveness about whether the supposed August 4 virtual meeting on the sugar import plan did really take place.

Hontiveros, in her interpellation of the Senate Blue Ribbon Committee report on the sugar importation fiasco, asserted that Rodriguez, like former Sugar Regulatory Authority (SRA) Administrator Hermenegildo Serafica and former Board Member Aurelio Valderrama, must also be reprimanded for not divulging at the start of the hearing when he presented a supposed timeline of events that they had met with President Ferdinand Marcos Jr. and discussed the importation plan.

“In the last hearing, I proposed that the committee request for a copy of the Zoom recording of the meeting. Was that request ever made? I still insist that request is valid and reasonable because the committee report itself mentions that meeting,” Hontiveros stressed.

In the last Senate hearing, Serafica was called a liar after claiming the President allegedly mentioned a plan to import 600,000 metric tons of sugar during a Zoom meeting.

Hontiveros stressed that such statement was corroborated by former Board member Valderrama. The uncorroborated testimony, on the other hand, was Rodriguez claiming that no such 600,000 MT amount was mentioned, according to the senator.

“Sabi ng good Chair during the hearing, there is no corroboration to the testimony of former Administrator Serafica. Pero hindi ba, is it not true that former Board Member Valderrama corroborated the testimony of Mr. Serafica? Ang uncorroborated testimony ay yung kay dating ES Rodriguez na walang 600,000 metric tons na nabanggit,” she said.

Hontiveros also questioned Rodriguez’s failure to report back to the Senate, contrary to what he promised during the last hearing, to verify if such a meeting took place. Such failure, she said, is blatant disrespect to the Senate as an institution.

“An important point that needs to be made here is that despite the request of the Blue Ribbon Committee ay hindi tumugon, hindi tumupad si ES. In that instance, nagpakita na walang paggalang sa Senado,” she said.