Malaysia’s Anwar says ‘no decision yet’ on PM impasse 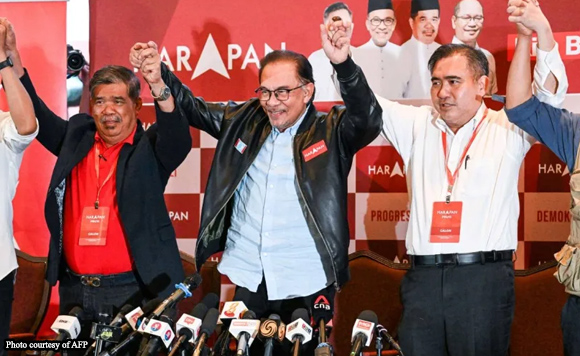 Malaysian politician Anwar Ibrahim said Tuesday there was “no decision yet” on the country’s next prime minister despite him and a rival being summoned to the king’s palace to break a post-election impasse.

Malaysia’s king, Sultan Abdullah Ahmad Shah, had summoned Anwar and his rival Muhyiddin Yassin in a bid to break the deadlock, but the two left without any answers.

“There is no decision yet,” Anwar told reporters after meeting the king, adding that “no timeline” was set.

Muhyiddin, who is backed by an Islamist party, later told reporters that since no bloc had enough numbers, the king asked him and Anwar to form a “unity government”.

He said he told the king his bloc could not work with Anwar’s group.

Anwar’s Pakatan Harapan coalition won the most seats at 82 in the weekend’s vote, on an anti-graft message — but fell short of the required majority.

The reformist leader held talks with his old foes at the graft-tainted outgoing coalition Barisan Nasional (BN), to get their support.

But BN’s vice-president and caretaker prime minister Ismail Sabri Yaakob said they had decided not to support any bloc and preferred to become the opposition.

A palace statement said the king will meet with BN members on Wednesday to get their views.

“His Majesty called and advised all the people to be patient and calm until the process of forming a new government and the appointment of the 10th prime minister of Malaysia is completed,” the palace said.

Najib is serving a 12-year jail term for money laundering and abuse of power for his role in the massive 1MDB financial scandal.

UMNO suffered its biggest defeat since Malaysian independence in 1957 at the recent polls, but had been courted by Anwar for its 30 seats.

Malaysia, one of Southeast Asia’s biggest economies, has had three changes of government in as many years.

“The new prime minister will have the difficult task of building a new coalition or a unity government that is able to decide on difficult and necessary economic policies,” Asrul told AFP.

“With the parties and MPs divided over their choice of prime minister, the question now is whether Anwar or Muhyiddin are able to maintain a stable government and remain prime minister for the entire term.”