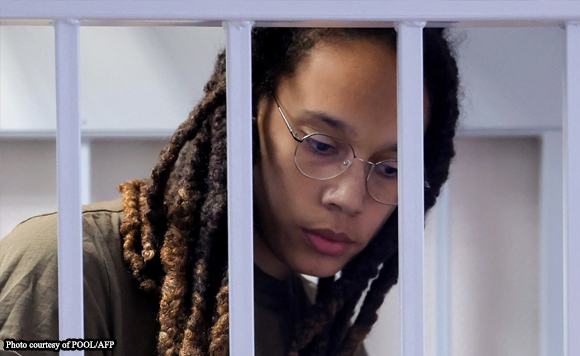 The 32-year-old’s nine-month ordeal — which unfolded against the backdrop of soaring tensions over the Ukraine war — came to an end Thursday as the United States secured her release in a prisoner swap with a Russian arms dealer.

Griner was convicted by a Russian court on drugs charges in August and sentenced to nine years in prison, even as US officials declared she was being wrongfully detained and worked behind the scenes for her release.

One of the leading players of her generation, the African American Griner is among only 11 players to have won an Olympic gold medal, WNBA title, Women’s Basketball World Cup crown and US college championship.

She helped drive the US women’s national team to Olympic gold in 2016 at Rio and last year in Tokyo, giving the Americans seven consecutive Olympic crowns.

In February 2013, Griner came out publicly as a lesbian in an interview with Sports Illustrated, becoming a sporting trailblazer.

Her endorsement deal with Nike was its first with an openly gay athlete.

Her wife Cherelle Watson Griner, whom she married in 2019, was at the White House when US President Joe Biden announced Griner’s release.

Cherelle Griner said she was “overwhelmed with emotions” after the “darkest moments of my life.”

– Career in Russia –
Griner had played in the WNBA off-season for UMMC Ekaterinburg, like many US pros seeking out the higher pay in Russia than they can earn in the US league.

But on February 17, 2022, one week before Russian troops invaded Ukraine, she was detained at the Moscow international airport as she was leaving and accused of drug smuggling, for carrying vape cartridges with cannabis oil in her luggage.

The WNBA star said she had permission from a US doctor to use medicinal cannabis to relieve pain from her many injuries.

Russian officials snubbed pleas to release her and she was put on trial and sentenced to imprisonment in August, before being transferred to a Russian penal colony in November.

– Record-setter –
The six-foot-nine (2.06-metre) center was born in Houston and led Baylor University to the 2012 US college title.

She set a record with 223 blocked shots in her 2009-10 freshman season, and finished with a record 748 blocks for her college career.

She was the first overall pick in the 2013 WNBA Draft by the Phoenix Mercury and helped the team win the 2014 WNBA crown.

The eight-time WNBA All-Star center won scoring titles in 2017 and 2019, led the league in blocked shots in eight of her nine campaigns and was twice named the WNBA Defensive Player of the Year.

“I think we take for granted sometimes how amazing she is,” US and Phoenix teammate Diana Taurasi said of Griner in last year’s WNBA Final, when the Mercury lost to Chicago. “We know who our bread and butter is. BG is just playing at a different level.”