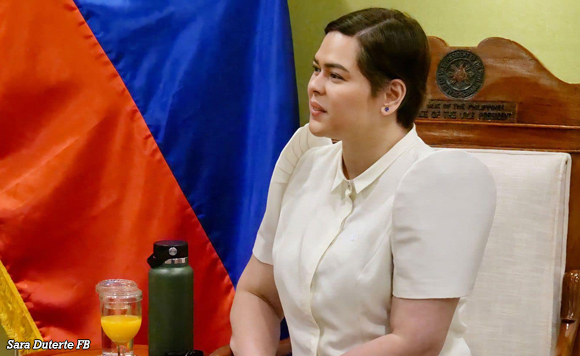 Vice President Sara Duterte has been featured in a Dubai-based magazine for her empowering and iconic leadership.

Wearing a powerful scarlet and ebony-lined Filipiniana, Duterte owned the front cover with its edition title “Future is now, and the future is the Philippines.”

In an Instagram post, the international Filipino-owned magazine Xpedition in the United Arab Emirates (UAE) said securing the leader on the cover page is a significant part of their 8th anniversary celebration.

“And now on our 8th anniversary issue, as we continue working to rise as a sole Filipino-owned brand, we go back to the roots of our fathers… The same vision of our iconic cover, an empowering leader with the largest mandate ever bestowed by Filipinos in history with more than 32 million votes,” it said Monday.

“Can’t wait to read your inspiring words, experiences, and plans!” another commented.

Even Miss International 2016, Filipina actress and model Kylie Versoza congratulated the team behind the special edition.

Xpedition also gave a glimpse of its special content, including stories of hope, hard work and home.

However, Duterte’s special story with exclusive printed photos is only for the limited edition.

Besides the section for the vice president, the 8th anniversary edition also includes travelogues and food features around the Philippines.

“An entire edition dedicated to one of the fastest growing nations in Asia, featuring the most enchanting travel destinations in the country, a rich culture and the best culinary journey,” it said.

To date, the Xpedition has over 151,000 followers on Instagram, with its publisher being the multi-award-winning journalist Josh Yugen behind the international craft. (PNA)